An Intervention For An Anorexic That Actually Worked!

I don't write about anorexia nervosa much as my sister had it so long that I tend to shy away from focusing on the subject too much. But I just read such an awesome story about a recovering anorexic that I had to share it. As many of you probably remember, my older sister passed away from anorexia nervosa a little over two years ago. This kind of story shows that as difficult a case as anorexia is, there is hope if people are persistent and confront the sick individual.

A case in point is Lauryn Lax. She was a member of the YMCA near Nashville, TN. The other members of the YMCA actually staged an intervention and the great thing about it is that it worked! Read about it here.

I had always wanted my sister to join a gym. I thought that other members around her would tell her that she needed help. She heard she needed help from her family nearly everyday, but we weren't getting anywhere. Interventions such as the one Lauryn went through work because sometimes friends and acquaintances have more of a pull than family does. My sister would never listen to me despite my persistence. 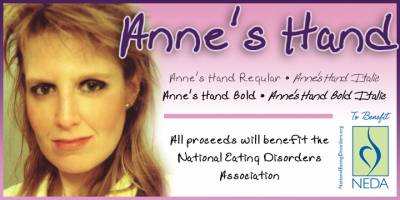 It's nice to hear a success story once in a while and to know that there's hope out there for anorexia. If you would like to donate to the National Eating Disorders Assn., you may do so by purchasing a font I designed in my sister's memory. You can also donate directly to the organization by clicking here.

It's Hard To Remember How Heavy I Really Was