The Reason For Not Cheating On The Way I Eat

I think the attached picture explains why I don't cheat, but I thought I would write about it anyway.

Back in 2011, I was over 350 pounds, having tried many different diet plans and feeling hopeless. I was addicted to unhealthy foods. I was eating fast food everyday, eating candy in huge quantities and not feeling very healthy.

When I lost weight in 2012, I had already started my health journey... it was about a lifestyle change and was the reason I lost 150 pounds, most of which was during the first year. 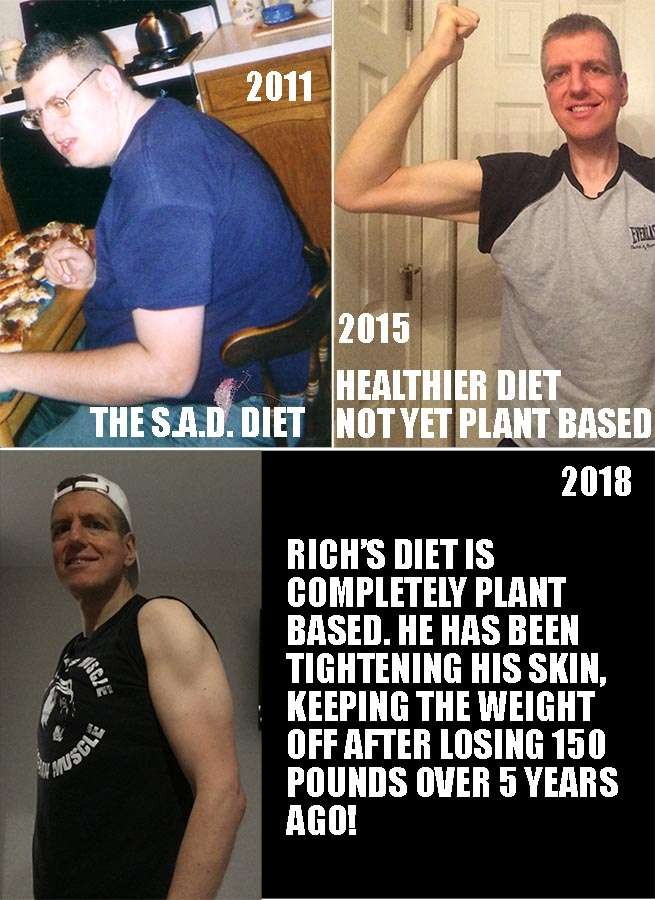 The thing is though, I wasn't fully plant based yet. Although I ate a ton of fruits and vegetables, avoided candy, red meat, processed meats, gave up aspartame, etc., I still ate turkey, yogurt, eggs and cheese. As happy as I was that I lost the weight, I was not happy with my loose skin, especially around my abs. Thankfully, I always challenged myself to keep eating cleaner, which is what led me to becoming whole food plant based.

I would do week long challenges of being vegan. This helped me realize how great I felt while doing the challenges. Eventually, it would lead me to research. If I ever wanted to tighten my skin, I would need to eat as clean as possible, which includes giving up animal products.

So, ever since September 6th, 2016, I haven't had any animal products that I'm aware of. And I never felt better. My muscles have been responding really well to this way of eating. My skin has gotten tighter around my neck and under arms and I have a lot more confidence. I hear my skin looks healthy and I have that "healthy glow". So how can I cheat on my eating plan?

I also became an ethical vegan during the process of becoming plant based. Now, if something has animal products... no way will I consume it.

A co-worker asked me why I never cheat and don't I ever get tempted to have a donut or candy? The answer is no... I don't crave those foods. I crave the healthy foods. And even if I didn't, I wouldn't want to eat something that has animal products in it. He just thinks I'm doing the "vegan" eating to be healthy, but there's a lot more to it than that.

As Dr. Greger once discussed, I don't believe in moderation. Why? Because I don't want to have moderate heart disease or moderate diabetes. I strive for the best health possible, which is what I think everyone should strive for.

You're Vegan? So Do You Eat Eggs (or Fish or Chicken)?

Why'd I Wait So Long?

What Motivates Me To Exercise 5 Days A Week?

What Is It That America Is So Obsessed With Protein?