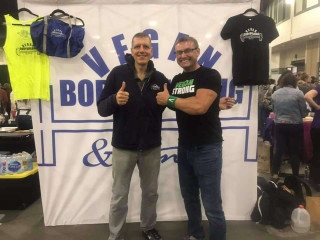 I have a lot of people that inspired my over the years, but two people stand out as the biggest influence to how I live my life today. One is Dr. Joel Fuhrman, who I have blogged about many times. The other is vegan bodybuilder Robert Cheeke.

Dr. Fuhrman defined the way I eat and Robert Cheeke helped me to become 100 precent vegan. Before learning about Robert, I was struggling with loose skin, especially around my abs, a result of my 150 pound weight loss. I tried everything to try and tighten my skin and believed that if I built more muscle, I could disguise some of the skin. But the problem was, my arms were skinny, resulting in loose skin that slightly hung, the chest was droopy and my abs were a mess.

I worked hard trying to build muscle. I did extra protein, as one of my trainers advised me to have 200 grams of protein a day. He even wanted me to have whey protein. I tried it one time and got sick; thankfully my body rejected it. My doctor also told me that’s way too much protein. I did not want to give up my goal of building more muscle. So I ended up doing a Google search. Somehow I came across Robert Cheeke's website.

His message resonated with me. Here’s a guy who clearly can build muscle without having to eat any kind of animal products. I was already 80 to 90 percent plant based and was starting to feel guilty about the limited amount of turkey or yogurt I was having. Robert was selling his “Shred It!” book and it included a 13 week  workout journal. I purchased both and thought I’m going to make this a challenge for myself. I’m going to go vegan for 13 weeks. And you know what? My muscles in my arms were growing faster than when I was having minimal animal products!

By the end of the 13 weeks, I never wanted to go back to my old ways. I became an ethical vegan, choosing to not want to be a part of the culture that harms animals in any way for our use. I started watching videos, forcing myself to see what happens behind the scenes in slaughter houses. I know I would have went vegan eventually anyway, but Robert opened my eyes to it first. I will always credit him for his influence.

I proudly still wear his “No Meat No Problem” shirt at the gym, even to this day. The shirt is in perfect shape, just goes to show you what quality of products you get when you order from Robert’s store.

Just as I’ve thanked Dr. Fuhrman over the years, I also thank Robert Cheeke. i had the honor of finally meeting Robert at a veg fest in Boston. I consider Robert a good friend now, and hope to see him at the next veg fest, whenever in person fests happen again!

Recently, I had the awesome opportunity interview Robert. I talk with him about what led him to going vegan when he was just 15 years old, and how he became a body builder. He also discusses a new book “Plant Based Athlete” that is now available for pre-order on Amazon. I highly recommend the book to all my readers out there. He wrote the book with Matt Frazier, another awesome vegan bodybuilder.

One Year Since My Abdominoplasty