One Year Since My Abdominoplasty

Wow, it's hard to believe it's been one year since my abdominoplasty (commonly known as a tummy tuck). This was a procedure that I put a lot of thought into and was something I waited 5 years to do. I have absolutely no regrets doing it, as I gained so much more confidence since then. 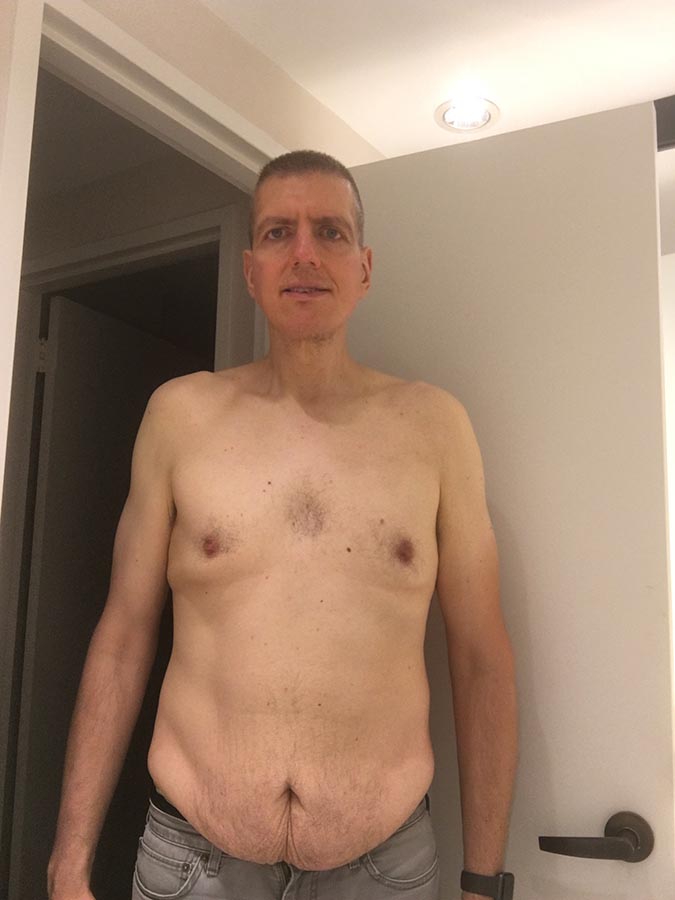 For 5 years after my incredible 150 pound weight loss, I worked hard trying to tighten my abs. I did everything, from machines that heat the skin as a way to tighten, special creams, wraps, you name it, I did it. It wasn't just the ugliness of the skin that bothered me, but also the irritation that went along with it. I would get itchy and irritated in that area. I also hated the flopping sound it would make when I ran as I would feel embarrassed by it.

So when it was 5 years, I began to look for a doctor. I must have done 6 or 7 consultations. Most were good, but I remember one consultation where the doctor said he would have to do a vertical incision in the middle, up to below my chest, making it seem like I was some kind of suitcase! Luckily all the consultations after that got better. One of the last consultations I did was with Dr. Richard Reish, who has a practice in New York City.

Dr. Reish had such enthusiasm and confidence that I knew he was the right choice. He showed me results from other patients and was accessible with any questions I had. Here are the reasons it was an easy choice to pick Dr. Reish: 1. He really ares and enjoys seeing the patients reactions when he unveils the work he did. 2. He has top notch staff. Everyone on his team provided friendly and caring service. 3. He gives his patients his cell number, so any questions you have are only a text message away. 4. He gave free consultations. This is important to someone who is doing a lot of consultations. The fees can add up! 5. He does his procedures right in his office. I did not want to go to the hospital as I worry about infections.

I remember the day before the surgery well. I left work and took the tran to New York. I stayed at the motel that the doctor recommended. I don't know how I got sleep that night but I did. The next day, at 6AM, I took a cab to his office. When I got there, I must have walked around the block about 10 times before deciding to go in.

I had so much anxiety, worrying about the anesthesia, wondering what the pain would be like, etc. The anesthesiologist Dr. Spitzer, put my mind at ease. She is awesome at what she does and she thoroughly explained what was involved. I had a quick exam that morning and was ready to go.

Dr. Reish drew a diagram on my belly on where the incisions would go. The anesthesiologist administered the meds and I fell asleep. When I woke up, I was amazed at how wide awake I was. The only thing is, I had to get used to how to stand up. I was bent over for about a week after the surgery and that would make my back sore. But within a week, I was pretty much standing up straight.

I had two drains that were placed on the left and right side of my belly. These drains were so annoying and also caused burning sensations. One drain came out within seven days. The other drain was in for 3 weeks, which was torturous! I had to choose my outfits carefully so that I could hide the drain.

Also, my regular size 34 pants did not fit with all the swelling. Instead of buying larger size pants, I wore jogging pants daily. It wasn't until like the second or third month that I started wearing my regular clothes again.

I did get an infection a month after the procedure. My right side started to get extremely swollen and red. Eventually blood ad fluid started coming out. I almost went to the ER but Dr. Reish gave me instructions on what to do until I saw him. Someone gave me a ride to New York and the doctor took care of the infection. He left the wound open to let the rest of the infection drain out. I was also put on Cipro. I found out I was allergic when I started getting a severe pain in the muscle of my right arm. The doctor told me to discontinue use after 5 days which was fine, the infection went away.

However, the infection caused another issue. The way the skin healed around the area required a revision. Dr. Reish did the revision while I was fully awake, using local anesthetic. This took maybe a couple months to normalize but e did such a great job fixing that area.

He did one other revision, that of my right love handle. He told me from the beginning that the love handles might have to be snipped. Thankfully only my right side needed it. 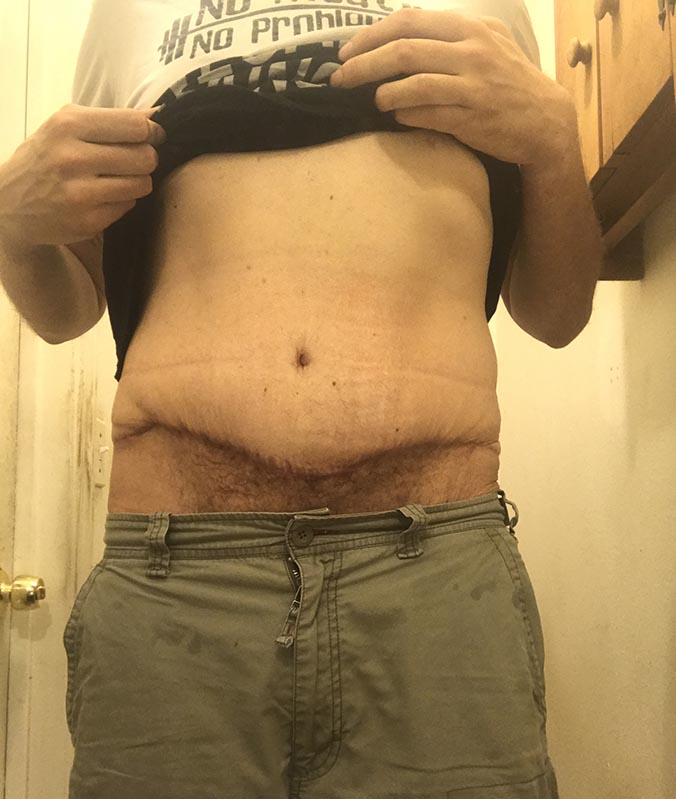 I am so happy with the results. It's not about perfection. It's about the little things, like not hearing my stomach flop around when I run. It's about not having an itchy belly. It's about being able to show my belly without feeling embarrassed. My belly is still swollen where the love handle was repaired. I don't think the after pictures I take now will be accurate as it continues to improve each day. You have to understand that swelling can sometimes last a year or more. But I will never regret the decision to do the surgery. It's the only surgery I'm hoping I'll ever have to do.

I'd like to add that I did this surgery 100 percent plant based. I ate clean before and after and I think it helped me heal quicker than most. I did not take one painkiller, not one, because it was not needed. I was able to exercise after about 6 weeks. And the procedure did not slow me down. I've since did my first half marathon and am focusing on muscle building for the time being.

Building Muscle But What About Body Fat Percentage?

The Shred It! Challenge Works! The Results Are In!

What Motivates Me To Exercise 5 Days A Week?

Shred It Challenge Update... A Work In Progress

Plant Strong... The Name Says It All!