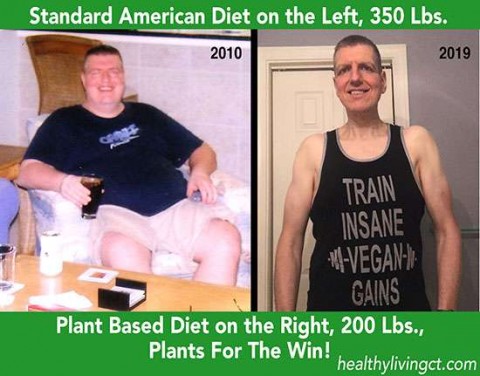 I know many of my vegan friends can related when I say that I wished I went vegan years ago. That being said, it is now my anniversary of being 100 percent plant based, as my last day of consuming animal products was on Sept. 6th, 2016.

I had been mostly plant based since 2012, but still relied on turkey, eggs and yogurt, along with all the fruits and veggies I was consuming. I cut out all the processed foods I was eating prior to 2012 and was feeling great. I was working out hard and getting results. I had lost the first 120 of my 150 pound weight loss within the first year.

However, something was bothering me. I was watching videos of animals being abused and hearing health concerns about too much animal protein. My personal trainer at the time was also not helping, telling me to have 200 grams of protein per day. I was working on building muscle but thought there had to be a better way.

Somehow, I stumbled upon Robert Cheeke's website and decided to purchase his "Shred It!" book and workout journal. This was completely life changing for me. Accompanying the book was a workout journal, which lasted 13 weeks. My thought was I would return to animal products after the challenge was over. I had done week long or two week long vegan challenges before, but always thought they weren't long enough. I was excited about doing this for 13 weeks.

But after the 13 weeks, I had no interest in ever going back to animal products. I was feeling even better than I was when I consumed minimal animal products. The energy and alertness experienced after giving up animal products was indescribable. I felt awesome and felt happy that I was helping animals.I was building muscle better during the 13 weeks than when I was eating turkey. I had no reason to go back to my old habits.

It was during this time that I also became vegan. I was "whole food plant based" during the 13 week period but went completely vegan too. After witnessing countless videos on social media, I did not want to be a part of animal abuse. I no longer wanted to use any products that came from an animal, including leather or household items.

My concern for the environment was also increasing. After watching "What the Health", I saw what the meat industry is doing to our planet on a daily basis. I now realize that if all of us were to change toward veganism, even cut down on meat, we can have a huge impact on our environment.

Some of my friends are reluctant to say they are both plant based and vegan. Many of them feel you can only be one or the other. I don't buy into this. I know I'm not abusing animals or consuming animals. It may be because of my health but it's also for the animals. I feel better about myself, and feel like I am making a difference in others. I think my weight loss speaks for itself. I lost all that weight by eliminating red meat and processed foods from my diet and ate only minimal animal products from 2012 to 2016. I would say I was probably 80 percent plant based during those years. When I went 100 percent plant based, my compassion for animals grew and I never wanted to be a part of the culture that abused and slaughtered them. How could I not call myself both plant based and vegan?

Tweet
Here’s What A Plant Based Athlete Eats And Does Fo...
One Year Since My Abdominoplasty

You Can Cheat On Your Diet!

My 2nd motivation to lose weight: A trip in Boston

How Fat Was I?