What Is It That America Is So Obsessed With Protein?

The question is everywhere for vegans... "where do you get your protein from?" But vegans along with meat eaters, junk food eaters, low carb dieters, high carb dieters, whatever, they all get enough protein. It's the one thing Americans don't need to worry about and in fact, their obsession with it might be leading them down a road of disease and obesity.

Do you know how much protein the average person needs? Only .8 grams of protein per kilogram of bodyweight. I am 210 pounds... that comes out to be about 76 grams. My personal trainer years ago told me to have 200 grams per day. If I listened to him, not only would I have gotten nowhere with my goals but I'm sure I'd be sick. Personal trainers are not supposed to give out nutritional advice, but I have yet to meet a trainer that will follow this rule.

So if I were to consume excessive protein, what do you think happens to what I don't need? It either turns to fat or gets wasted and leaves the body. These people that purchase protein powders, think about how much money they are wasting. They won't build muscle any faster. If someone is building muscle it's because he is working hard and eating enough calories. It is not because of the excessive amounts of protein that some people might be consuming.

I was feeling pretty good that maybe the talk about protein was going away. This guy at the gym I go to was talking to me the other week about it. He was talking about nutrition and happened to say that he doesn't bother with protein powders. He then went on to say that if someone eats enough, no matter what their diet, they will have enough protein. Awesome someone gets it, and I didn't even have to tell him. This guy wasn't a vegan... he told me he doesn't feel right unless he has meat. But at least he understood the basic concept of portein and that you don't need excessive amounts to build muscle. 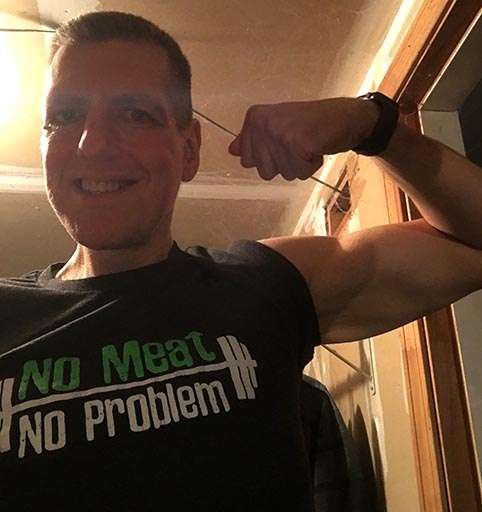 But then I was in the grocery store the other day. A cashier who happened to know I was vegan and lost weight said to me he doesn't understand where I get my protein from. Here we go again! I calmly told him all plants have protein and if you eat enough, you'll have enough. But this was just a reminder of how wide spread this protein obsession really is.

And if you still aren't convinced about protein, check out the "Proteinaholic" book by Dr. Garth Davis.

I don't bother with expensive protein powders, except for if I work out extra hard. In that case, I will use a little pea protein. Note that the powder has no other ingredients but organic peas. I get my protein from whole plant foods as so many other vegan athletes do. I don't feel like I look protein deprived... here's hoping the protein myth goes away!

How Much Protein Do I Need?

Winner Winner Chicken Dinner? I won "Most Weight Lost" in the YMCA's Challenge!