Here's What I Ate During the 7 Day Vegan Challenge

The challenge is over after tonight, but I am so glad I participated in it! Although I'm not staying vegan for the moment, I do plan to try it again. More on that later. First I wanted to discuss my diet during the challenge.

I wanted to focus on quality food, nutrient rich and good sources of protein. I planned the foods I would eat before I started the challenge. 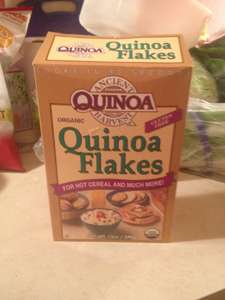 For breakfast, I found a cereal called Crunchy Flax with Chia by Enjoy Life. Each serving has 7 grams of protein, plus the all too important omega 3, which many Americans lack in their diet. Another good choice for breakfast is Quinoa Flakes. This cereal is awesome, much better than the Cream of Wheat you probably remember eating when you were growing up. I added So Delicious Protein Plus Almond Milk to the cereal. This milk is great and provides extra protein from pea protein isolate.

For lunch and snacks, I've been using a cracker, or cake by Suzie's called Whole Grain Thin Cakes, with quinoa. I add hummus on top for one of my snacks and will have almond butter on some crackers for lunch. I make sure the almond butter has no sugar, such as the one Whole Foods Market sells. No need to have the added sugar!

After my workouts, I continued to have the protein shakes. I usually have the pea protein isolate powder by Life's Basics. This powder is a good choice for those who do not like Whey. There's other vegan powders too, with more vegetables in them, but I have so many vegetables daily, I think the pea protein was enough. I had two to three servings as my trainer wants me to get enough protein. These powders are gentle on the stomach, which is a plus!

For dinner, I had lots of vegetables… Spinach, bok choy, swiss chard, lots of broccoli and beans. The broccoli and beans are especially important as they have a lot of protein in them. I also had more quinoa as a side dish, along with two slices of Flax and Quinoa bread from Whole Foods Market. This bread has 7 grams of protein per slice and there are very few ingredients in it.

I also ate plenty of fruit daily. Apples, strawberries, blueberries and of course pomegranates. You might recall that I love pomegranates as they help lower blood pressure. 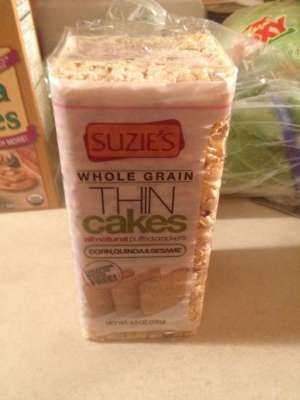 I also drank plenty of water, which I would do regardless of the challenge. As you can see from the food choices above, that I do eat a lot of quinoa. I started to eat it probably more than a year ago when I found out it was a complete protein. It also has many antioxidants and also has the healthy fat, the monounsaturated fats. I do try to eat quinoa every day.

Now, you might be wondering why I'm not sticking to the vegan diet. I miss the Greek Yogurt and I would rather have more food than have the extra protein shakes. The Greek Yogurt has 20 grams of protein, something that's tough for me to overlook. Plus, I still want turkey once in a while. Maybe I won't have it as often as I did before the challenge.

I would like to do the challenge again. I like the idea of not being so dependent on animal products. Plus, I think I feel better overall being vegan. I highly recommend anyone looking to get healthier to try being vegan for a week. You might find you don't need animal products at all!

Start of the change

Keep A Healthy Weight and Still Enjoy the Holidays!

We Are A Protein Obsessed Society!

Great reading here! This will motivate me to try the challenge now!