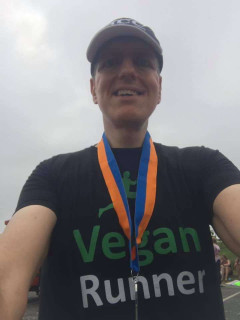 I think I went back to running too quick. My knee was feeling awesome for weeks after the physical therapy. I made the mistake of making some wrong movement and here I am again, a swollen left knee and doing physical therapy.

I know I went back to running way too soon.Even though it was feeling great, I went full into it again. Had I given it even more time to heal and get stronger with the strength training, I think I could have avoided the swollen knee this time.

You might be wondering where this knee injury came from. When I was a freshman in college, my knee somehow twisted 180 degrees when I stood up. I have no idea how it happened as it happened so fast. All I know is, it was excruciating pain. My roommate had to retrieve crutches so I could get to the school nurse. I did tear something but because it healed a few days later, once the swelling went down, nothing further was done.

As I began to do running a few years ago, I had a habit of overtraining. I remember doing my first half marathon and still hitting the gym for some strength training afterwards. That was insane!

After the Manchester Road Race in 2019, I remember not resting my knee. I noticed that it was starting to feel numb. The more I stood on it, the more the fluid would build up. I winded up going to the ER in an ambulance as my knee was red, swollen and so painful. The doctor drained my knee and gave me crutches.

After one day, I no longer needed the crutches and began physical therapy. I have nothing but good things to say about physical therapy. Every time I have gone, they get me back into shape and feeling good. This first round of physical therapy, the therapist filmed me running. That's when I found out I was running too loud. This meant I was putting so much extra pressure on my knee. After that, I practiced running on a treadmill while trying to be quieter and it helped so much.

But a few months ago, almost an anniversary from the first time my knee got swollen, it happened again. This time, I elevated my leg, put ice on it and waited to go to the orthopedist the next day. I had to have the fluid drained again. Back to physical therapy for a month, and went right back to running afterwards. This time, I am going to make sure I am ready before fully getting back into it. I will focus on shorter distances and will wait until the doctor says it's OK.

The orthopedist believes that I suffered a small tear. She thinks it won't be a problem once the swelling goes away. I am icing it and wrapping it with a bandage. The swelling is indeed draining so it's getting there! My orthopedist agrees... my healthy diet is taking the inflammation away much faster. This time around, there's no pain, unlike when it first happened.

I'll leep you posted as I progress. I can't wait to get back to running but will wait until it's time. In the meantime, I plan on getting a stationary bike!